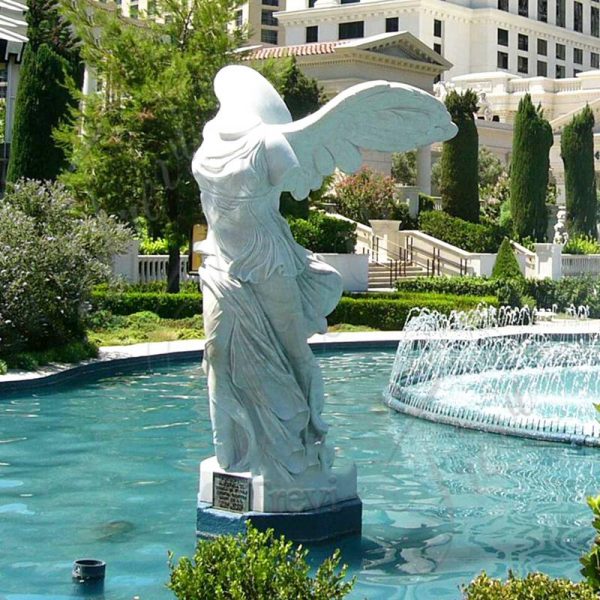 This famous marble statue of an angel is historically significant in Western mythology. When this horse with huge wings hits the ground with its hooves, it symbolizes the arrival of good luck, hope and beauty. We can customize it for you, please feel free to contact us.
Item No: MOKK-223
Size: Life Size or Customized Size
Style: Western Style
Material: Marble
Package: Strong Wooden Cate
Service: Customize Acceptable

Details of the Goddess of Victory:

The sculpture of the winged victory of samothrace seems to be suspended in the air. Samothrace’s Wings of Victory is one of the rare Greek statues. It was offered as an offering to the gods of a sanctuary on the Greek island of Samothrace. First of all, the statue of the goddess of victory is placed high, and people can see her from a distance. The scene heralds Nike, the winged goddess of victory, about to board a ship. 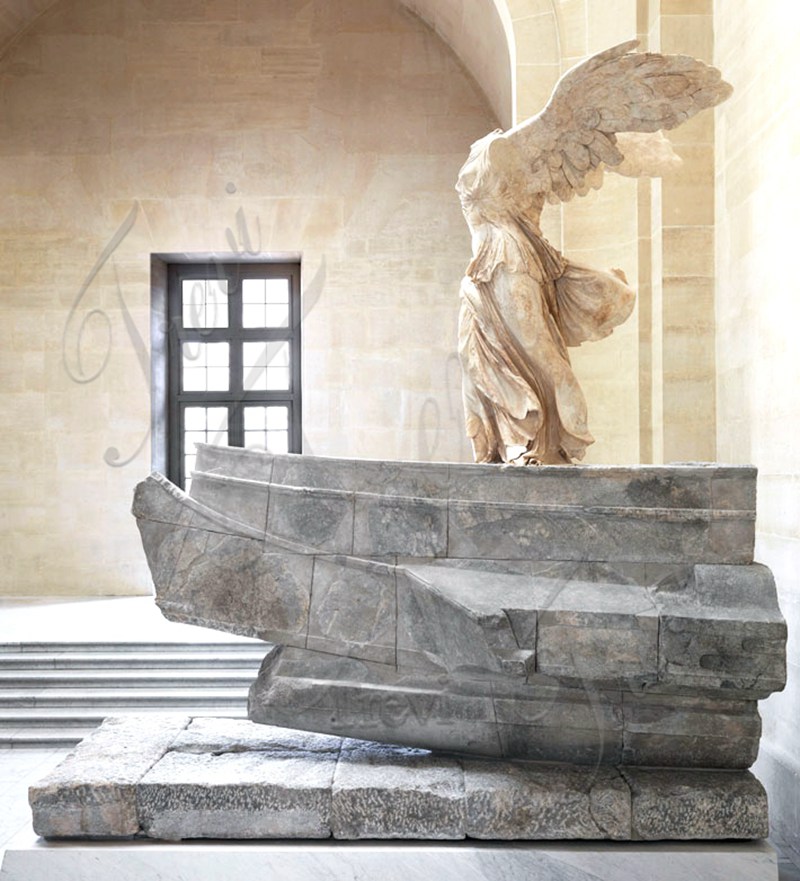 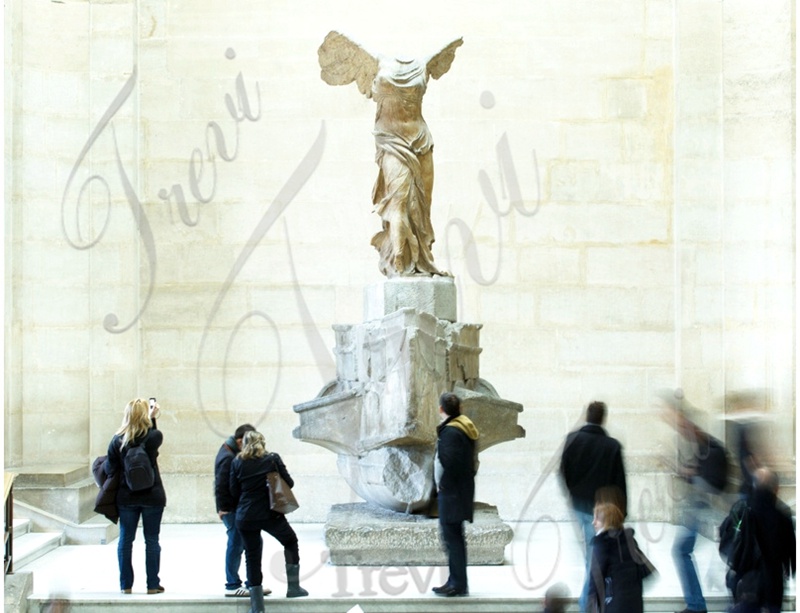 The Wings of Victory of Samothrace is one of the most famous statues in the Louvre. The sculpture stands gracefully at the top of the massive Daru Staircase. This spectacular setting has been carefully chosen to showcase masterpieces of Greek Hellenistic art. Ancient sculpture meets modern architecture at one of the museum’s most iconic attractions. 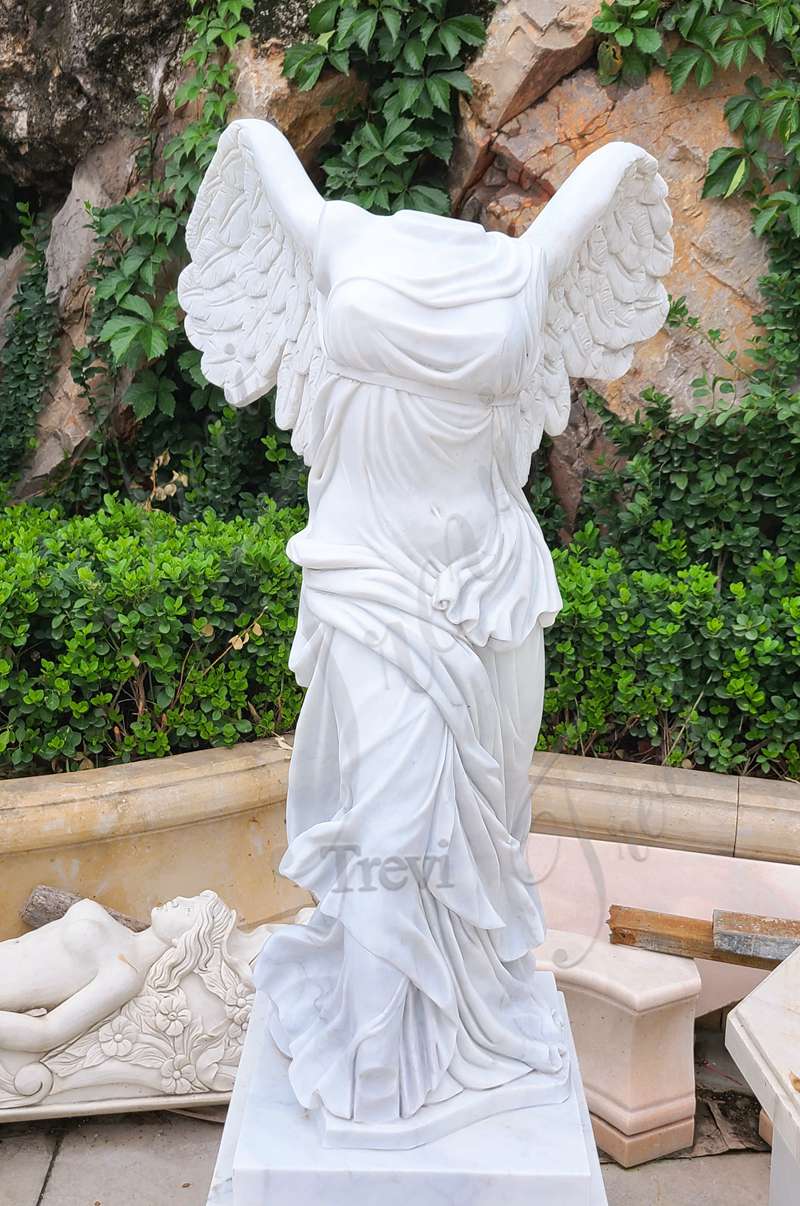 The famous winged victory of the Samothrace statue is named after the Greek island of Samothrace located in the Aegean Sea. She was discovered by Charles Champoiseau in 1863. The statues are stunning but broken and incomplete. Of these, about 110 fragments were found, but not her head or arms. Charles Champoiseau returned to Samothrace in 1879 in search of them without success. 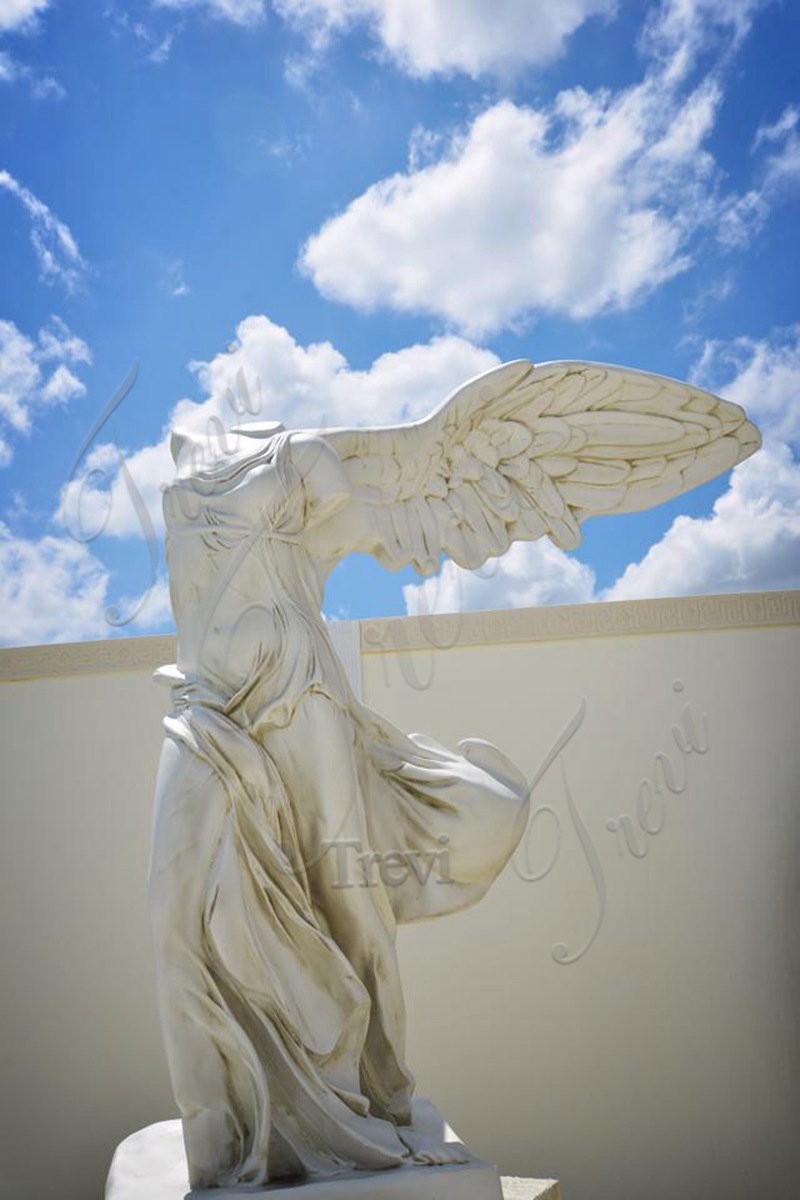 A second excavation uncovered the pedestal and prow of the boat that was used as the base for the statue. In addition, people also found a part of the wings. Therefore, the rest of the sculpture was repaired with plaster to fill in the void so that Victory could return to its original form. The statue has been restored several times since she was discovered, and keeps changing shape!

Offerings to the Gods:

Made of Paros marble (one of the finest marbles in Greece), the statue represents Victory about to board a ship that has just won a naval battle. It probably dates back to 190 BC and was commissioned to celebrate victories. Of these, perhaps the inhabitants of Rhodes erected it in Samothrace. People are to thank the great god Kaberi on the island. For, they were worshiped throughout the Greek world. 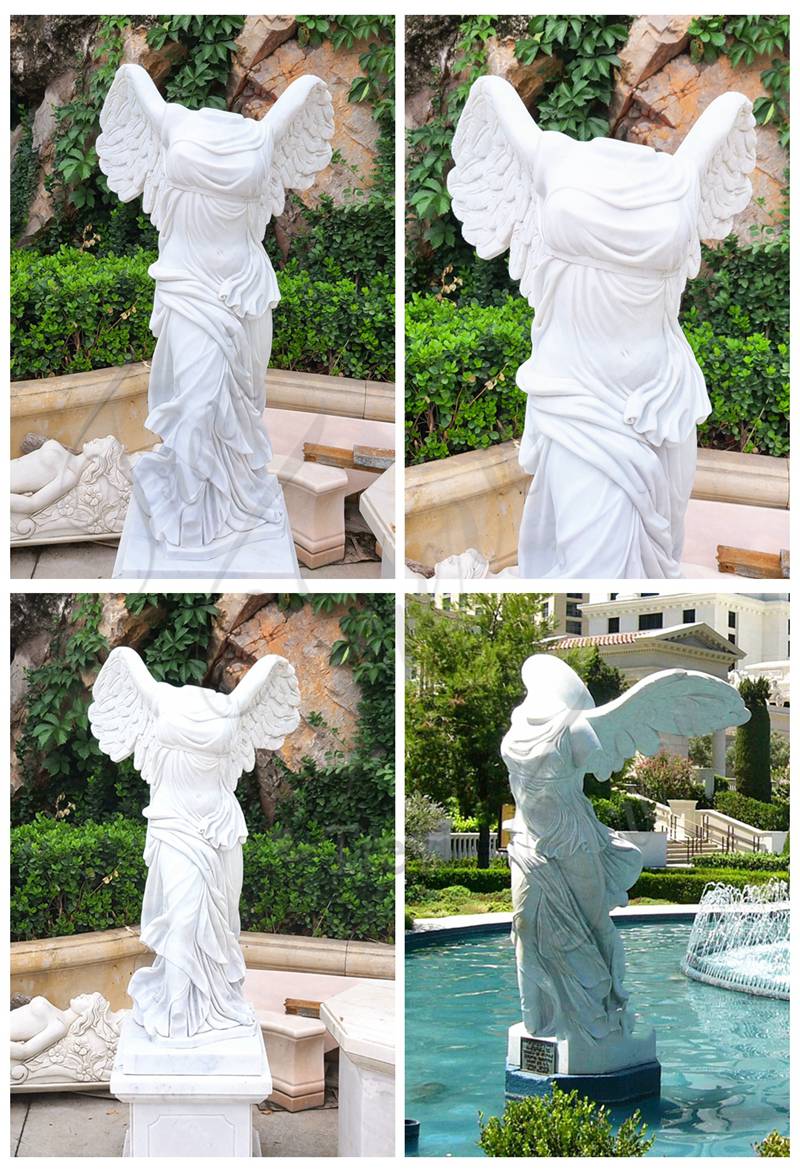 Who Carved the Victory?

Now in the Louvre Museum, it is not known who made the Wings of Victory of Samothrace. But it is believed to have been built on the orders of Demetrius Poliocretes sometime between 295 and 290 BC. This is a masterpiece of Greek sculpture from the Hellenistic era, depicting the goddess Nike. 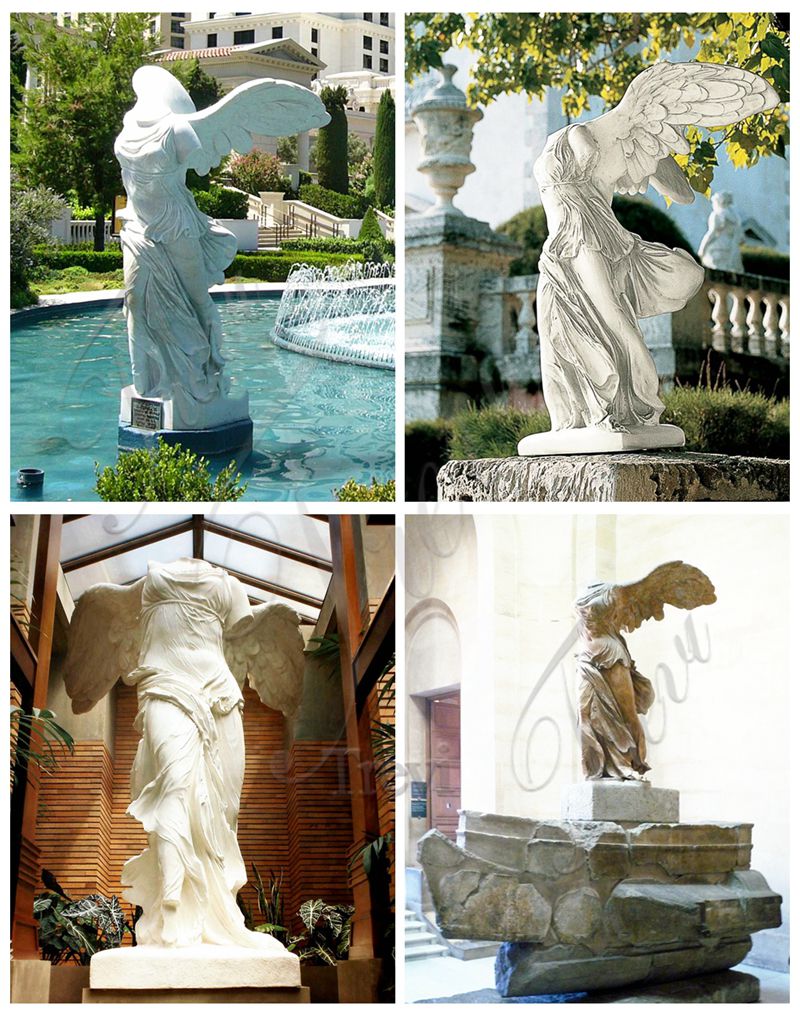 Who is the Goddess of Victory with Wings? 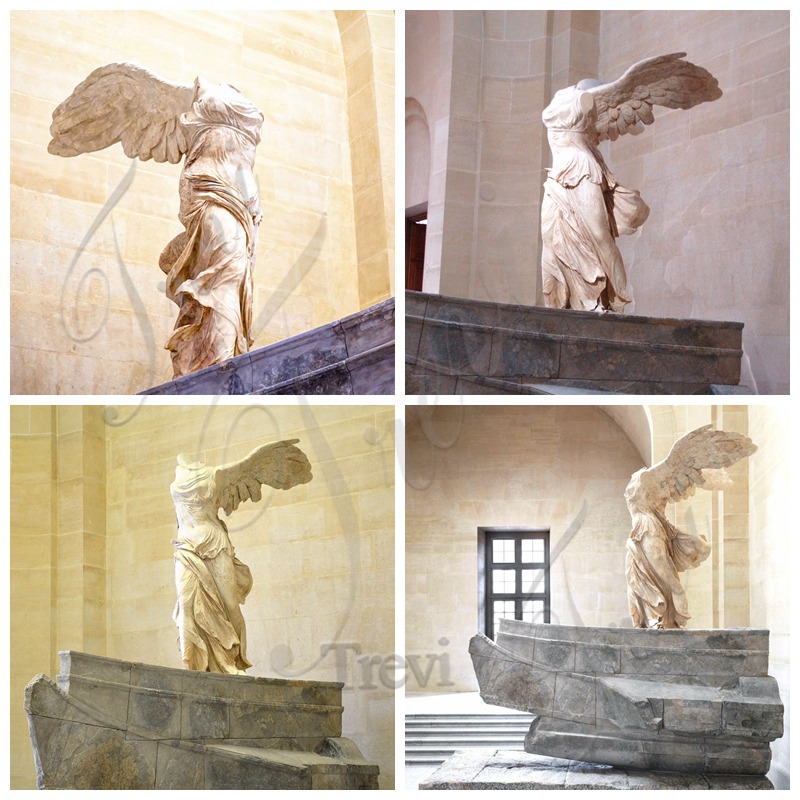 What does the Nike Statue Represent?

This 18-foot-tall sculpture depicts Nike, the Greek goddess of victory. The winged figure marches triumphantly to the front of a ship as wet, windswept drapery clings to her body. This has led historians to conclude that it was created to commemorate a successful naval battle. 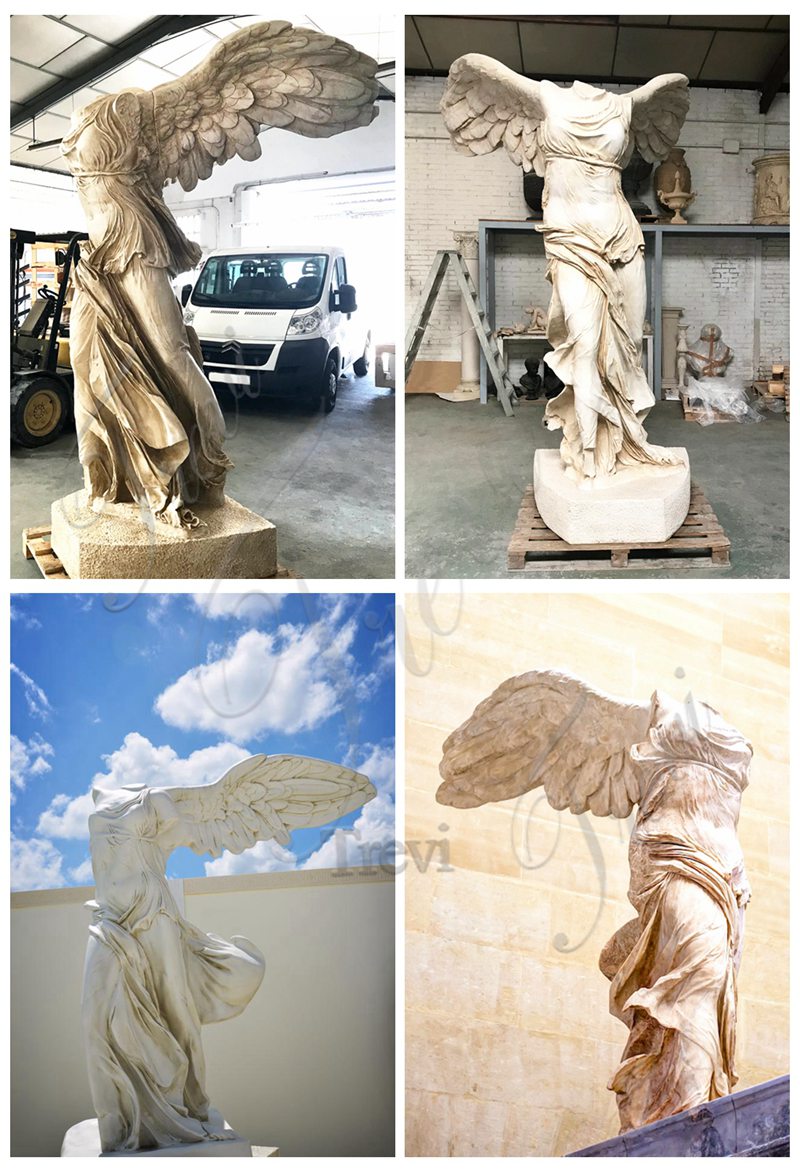 The Story of the Victory Statue of Samothrace：

The Victory statue of Samothrace is one of the masterpieces of Hellenistic sculpture. The figure is composed of wings and a left leg in oblique lines, and the silhouette is constructed in a sloping position. 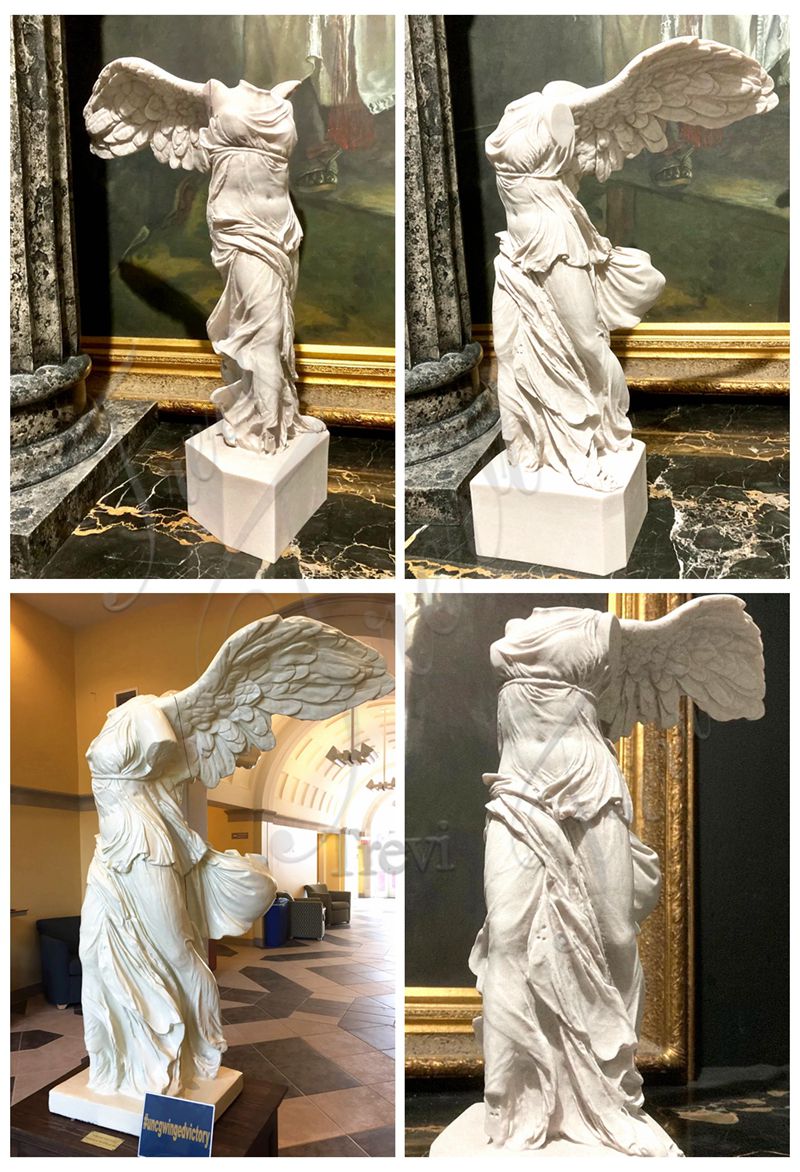 The sculptor demonstrates the mastery of the pleating of the skirts: the wide skirts are at times smooth against the skin, flowing naturally as if they were real, and at other times blowing in the wind. The female nude body is revealed under the cover of the dress.

The Advantage of Trevi Factory:

As a marble factory with over 35 years of experience in carving, we can provide you with a range of famous Victory statue of Samothrace. We are customer-focused. Possess ethical business practices and the ability to fulfill large orders. We have earned a commendable place in this field. As a quality oriented organization and a reputed company in the field, the quality of the statues we offer will never be compromised.

Our experienced marble craftsmen began to learn marble carving at a young age, they are very familiar with the various techniques of marble carving. As a result, this famous Victory statue of Samothrace could be completely reproduced. We guarantee that all the carved details are hand-carved by our professional marble masters to ensure the perfect production of all the details. 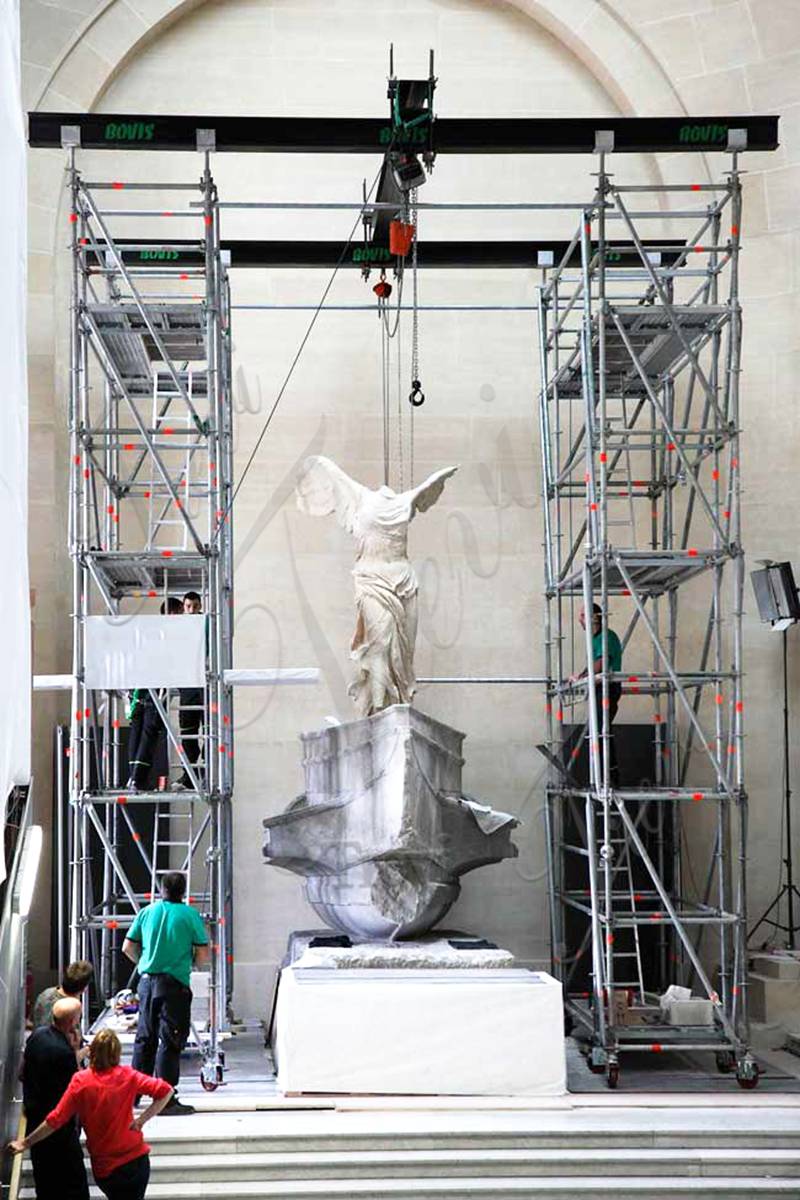 Trevi Art Sculpture is a factory based on sculpture. With art as our roots, we use the traditions of Chinese culture to approach the marble sculptures of Western writing. Showcasing the charm of European art and its unique style. We are innovative and pursue excellence. if you want to have a winged victory of samothrace statue please feel free to contact us.