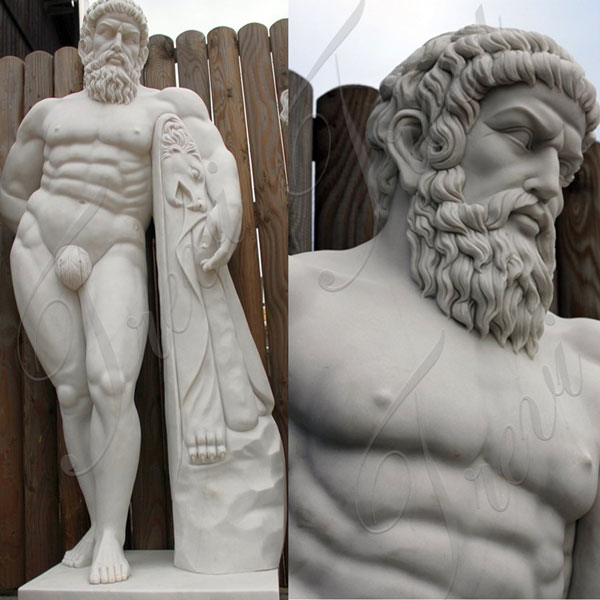 The replica of the famous Hercules statue of Franks is made of the finest white marble and is very beautiful for the garden decor. Hercules relied on his favorite weapon, the club was carved from olive trees, and the coat of the Nimian lion was hung on it. The flourishing appearance of ancient heroes has been very beautiful and smoothed (polished) from the stone carvings of marble blocks. The appearance and resistance of the white marble is impressive, making this natural stone suitable for outdoor use.

The Detail of the stone Hercules statue Replica Mythical Hercules
Hercules is the Roman name of the Greek demigod Hercules. The son of Zeus and the mortal Alkmeen were hated by the wife of Zeus, the goddess Hera, and had to fight for her own life. Even a baby, Hercules had an impression of Hera’s list, that he sent two poisonous snakes to his bed. But Hercules killed the snake with bare hands, and his mother found him playing with the body of the giant beast the next morning. ok， let us go on the story about the Mythical Hercules.

In classical mythology, Hercules is known for its power and many far-reaching adventures. The extraordinary strength, courage, intelligence and sexual performance of men and women is one of the characteristics he is often given. When power is not enough, Hercules uses his mind many times.
Therefore, it is not surprising that he successfully solved the 12 tasks set by Hera in order to enter Olympus as the right God. The goddess Hera was not meant to make the hero easy, so with the help of Hercules cousin Orist, she conceived a task that was virtually impossible.
The first task was to kill the Nemean lion. Its coat was thick and there was no weapon to hurt it. Hercules killed the lion and since then worn the lion’s skin as a protective armor and the lion’s head as a helmet.
Together with his cousin Iolaos (Greek: Ἰόλαος), he completed the second task. It is especially difficult to beat a multi-headed monster Hydra. Once Hercules cuts off her head, two new heads appear, and only the cockroach can successfully defeat the snake-shaped monster. Once Hercules hit the head, Iolas jumped up and burned the wound with flames. So no head can regenerate, at some point all the heads are separated, and the Hydra is dead.
The third task is to capture the Arcadia Bucks with golden antlers. Hercules didn’t want to hurt this animal, so it took almost a year to complete the task with the help of the animal following our hero’s goddess Artemis.
A huge wild boar caught Hercules in an avalanche avalanche and brought his shoulder back to Eurystheus, who was threatened to death. This is the fourth task.
Now he wants to clean up the stables of King Ogis. The fifth task succeeded Hercules, who transferred the adjacent rivers and caused their water to overflow the completely dirty stables.
In order to complete the sixth task, the hero once again received divine help. Killing Stymphalian birds with sharp claws, dragonflies and iron wings, Hercules had to scare them. These birds are vulnerable on the ventral side and do not fly from their nests. Then Hercules received a golden rattle from the goddess Athena, who managed to blow up the birds. Hercules can now kill her in flight.
The seventh task of Hercules was to tame the Cretan Bulls. Once Poseidon sent a huge bull to the king of Crete to make sacrifices. The name of the king is Minos. He likes the bull very much, so that he gave up the animal. This in turn angered the sea god and ordered the bull to destroy the island. No one or animal is safe. Hercules successfully seized the bull and brought it to Eurystheus.
As the eighth task, Diomedes’ horses are waiting for Hercules. He should bring the cannibal mare to Eurystheus. The hero managed to do this by killing King Diomedes and feeding him to the horse. Then the animals became docile and Hercules could take them away.
The continued success of Hercules angered Hera and Eurystheus. But Eurystheu’s daughter is the idea of ​​the ninth mission. She is eager to get the Hippolyge belt, which is a bronze plate composed of Wehrgehänge, which Amazon received from her father Ares. The appearance of our hero must leave such an impression on Hippolyte, and you voluntarily gave him a belt. This made Hera an incandescent lamp, so the goddess mixed and spread rumors in the name of the Amazon among the Hippolytes, and Hercules kidnapped her queen. A terrible battle broke out and many soldiers, including the Amazonian, lost their lives. Hercules returned to Eurystheus and handed over the belt.
Hercules should now steal Giant Geryon’s herd. The giant lives on the island of Erytheia and has three bodies and six weapons. Geryon challenged Hercules to fight and killed him with a poison dart. Here, the goddess Hera also interfered with the battle and was hit and injured by the Hercules arrow.
In order to create the eleventh task, Hercules once again used a trick. He will take the golden apple from the garden of Hesperides and give the gods eternal youth. Only God was allowed to enter the garden, so Hercules, Atlas, asked Hesperides’ father to pick apples. In return, Hercules will be global. Atlas loved this and got rid of the burden. He went to the garden to pick up the apples. When he returned, Hercules summoned him to carry the earth again, so our hero could grab a mat for his shoulder. Atlas once again reached the earth, and Hercules took off with the Hesperides apple.
The twelfth and final mission on the road to the Olympic Herkules was to bring the Cerberus from the underworld. Hades, the god of hell, allowed Heracles to take his pet in a short time if he could capture his pet. In the estuary of the underworld Akhron River, he found three dogs and fought with him. Hercules successfully defeated the snaketail and brought it to Eurystheus. He was speechless and ran away.
Hercules should be regarded as the true God.

The Material of  natural marble sculptures/statues
Our natural stone products are mainly hand carved. All natural marble can identify large differences in drawing and color due to their natural source. Quartz veins, cavitation or other types of rock inclusions are natural phenomena and cannot be reclaimed. Therefore, such complaints are not included.

Trevi Garden Sculpture has been sold as a stone statue made of natural stone since 2000. Quality Sculptures are stone-rich and have many gardens and parks in sight. The numbers represent and always represent a special appreciation of the environment. Stone figures come from all types of natural stone. In the current program of the online store, there are stone statues made of granite and marble, as well as different lava stones such as Bass stone and rhyolite. These are handmade by experienced sculptors, carefully crafted and sometimes polished.