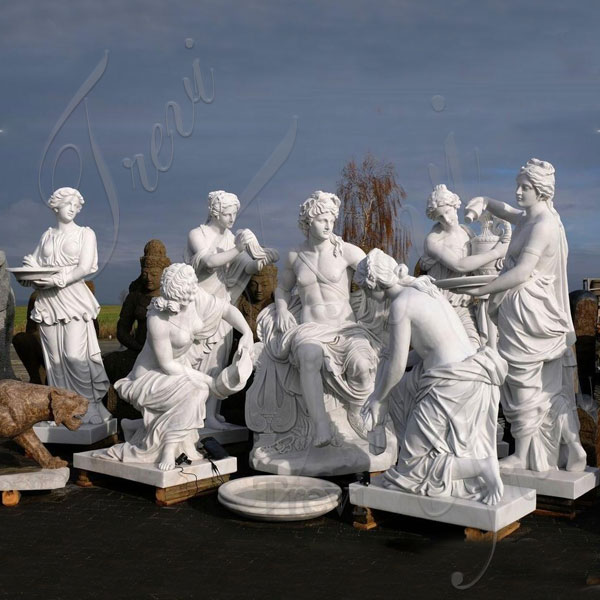 This sculpture group “Apollo Bath”, is famous marble sculpture group, there are seven Buddha statues, is made of white replica marble, and this is a beautiful outdoor garden statue.from the famous scene Thetisgrotte in the Versailles gardens.

Apollo (altgrichisch: Ἀπόλλων, Latin Apollo, Germany: also Apollo) in Greek and Roman mythology, art and music of the sun god and protector. He was one of the most important gods of his time and the most important protected area of ​​ancient times, Delphi’s prophecy, this god dedication. Characteristics
The “Apollo Bath” consists of seven life-size sculptures. The entire set of sculptures is made of fine white marble, and large marble bells are hand-carved as much as possible.

history information
The famous garden sculpture “Apollo Baths” in the gardens of Versailles are now a popular destination for artists, gardeners and historians. Here are some historical information about dealing with Apollo baths.

myth
In Apollo and its conception of the mythology represented by a sun god in Thetisgrotte in the late 17th century, the influence of Greece and Rome has been strongly blended according to current knowledge.

Bosquet’s “Apollo’s Bath” at the Palace of Versailles
The Boskett “Apollo Baths” at the Palace of Versailles showcase three magnificent sculpture groups in a romantic setting. These sculptures are today at Thetisgrotte in the Versailles gardens. After the 17th century performance, Thetis was the wife of Poseidon Neptune and their servant Apollo. Apollo’s five nymphs and 忒tis, self-washing his hair, the average group of three conch sculptures in the caves of the 忒tis. The sun god Apollo, who set the rest this evening, was taken care of by the fairy after he had finished his day’s work.

History of the Apollo Baths
The history of the Apollo bath began with “1664 with the court painter Lebrun, Primier PEINTRE du investment rate was appointed” and produced a sculpture group model. In 1666 was a statue of François Giralden’s master of decoration and commemoration, created with a set of sculptures commissioned by Thomas Leightin. This is the first (real) “marble masterpiece”, probably the most important thing in the Palace of Versailles. This work was created between 1666 and 1675 and commissioned by King Louis (Lewis) XIV. The sun god Apollo is clearly the identity of the French king, claiming to be “roi de solei” (the sun king).

GrottedeTéthys-intérieur
Originally, the sculpture group was in the “Sittis Cave” (French: La Glotte Citis). The “Sittis Caves” are not so today’s Versailles garden shrubs, but a rectangular planting, King Louis XIV. Built on the north side of the palace on his beloved honor Louise de la Vallièrre in the Palace of Versailles. In three urns, this is lined with lush, baroque-style shells and pebbles, three groups of sculptors.
However, in 1684, the grotto was demolished in order to expand and expand the castle. The three apse of the Apollo bathroom finally found its place at the 1687 Dome Boskett (French: Domus Bosquet’s dome that was not called at the time. There was a sculpture of the Apollo bathroom until 1705 to 1706 And in today’s then “Palace Bosquet’s Durban Apollo” (then Bosquet’s du Marais hotel) placed.
The Apollo Baths were called “Apollo Baths” only after about 70 years under King Louis XVI, “Bosquet des Bains d’Apollon”. Louis XVI. In 1776, the commissioned painter Hubert Robert made a new plan for Boskett in the garden. This is the era of British garden style and Chinese elements. Therefore, in 1778, the entire Boskett was completed in the popular English-Chinese style at that time, and it has only appeared in this form until today. The original Girardon and Regnaudin sculpture groups no longer decorated Thetisgrotte in the Versailles gardens. The marble originally used could not withstand continuous weathering, as these numbers were originally designed for the interior of the castle.
In 1978, the entire Boskett of the Apollo bathroom after 230 years was locked and restored from 2008 to 2010. You can visit again in the castle garden today.

“Apollo Baths” in Dresden
One of the most famous voters is the “King of Saxon in August”, in which “Bath of Apollo” is a bronze. In 1715, his French art dealer Raymond Leplat purchased the bronze he made in Paris. This is the second expensive bronze medal after the 38-part rotating great equestrian statue “August Strong”. At that time, voters had to spend 1,650 Saxon royal dealers on high fees. It can be seen today that the bronze restoration in the “Green Palace Dresden” is used in the marble replica of Versailles, the original arrangement and shape of the only engraved image compared to the marble statue represented in Louis XIV..