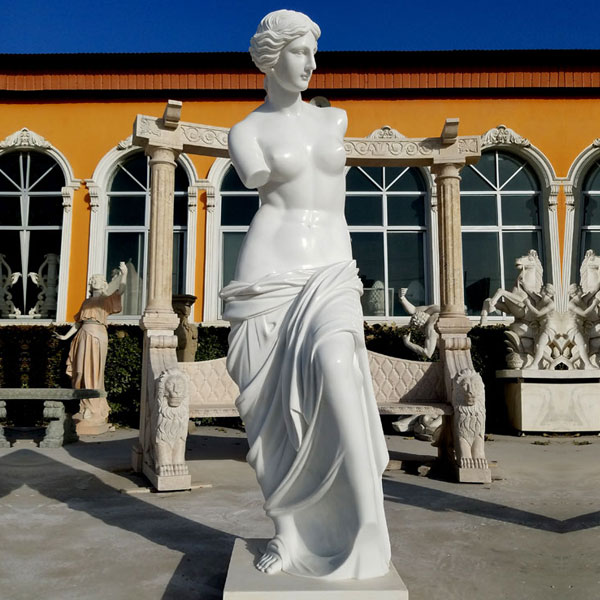 Vinas de Miro, the more famous is Milovinas, is an ancient Greek marble statue, is also one of the most famous works of ancient Greek sculpture.Originally Venus de milo statues was attributed to the sculptor Plax-saitresse, but the inscription from its base, the Venus de milo statue was considered Antioch Ayalexandro’s work.
Item No: TMC-06
MOQ:1 Piece
Material: Marble
Type:Famous sculpture around the world
Technical:Hand carved
Surface Treatment:High Polished

Founded in 130-100 BC, the Venus de milo statue was thought to depict the love and beauty of the Greek goddess Aphrodite (Venus and the Romans). This is a marble sculpture, 203 centimeters (6 feet 8 inches) higher than the actual size. After discovery, part of the arm and the original pedestal were lost. Venus de milo marble statue is now permanently exhibited at the Louvre Museum in Paris. The white marble statue was named after the Greek island of Milos, where it was found. It is generally believed that the Milos of Aphrodite was found on April 8, 1820 by a farmer named Yorgos Kentrotas, a farmer located on the Milos island of Milos Ancient village, now Trititi village, on Milos Island (also known as Melos de Milo) in the Aegean Sea, It was part of the Ottoman Empire.

Elsewhere, the discovery was identified as Yorgos Bottonis and his son Antonio. Paul Carus will find the site known as “The Ruins of an ancient theatre near the island’s capital Castro”, adding that Botonis and his son “accidentally walked through a small underground cavern, carefully covered by a thick plate, which hides two fine marble statues and several other pieces of marble, occurred in February 1820 “. He was apparently basing these ideas on an article he had read in “Century Magazine”.

Australian historian Edward Douich quoted a letter from the French consul Louise Brest in Milos in 1820, saying the statue was found by Theodoros Kendrotas, And he and his youngest son Giorgios (Yorgos) confused who later claimed credit for the discovery. Duyker claimed that Kendrotas was taking stones from a ruins church at the edge of his property–terraces that had been part of the Roman Coliseum–and found a rectangular underground cavern about 1.2×1.5 meters deep in volcanic tuff. In this hole with three wings, Kendrotas first noticed the upper part of the statue.

Despite these anomalies, there is a consensus that the statue was found to have two large chunks (upper torso and lower hem) as well as several herm (with heads at the top of pillars), fragments of the left upper arm and an apple in the left hand, and an engraved column base.