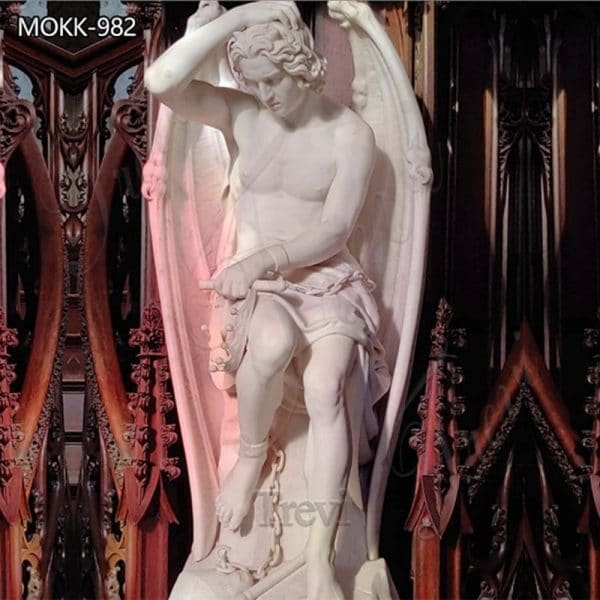 What is Marble Lucifer Statue?

This famous Lucifer sculpture is a religious sculpture made in white marble by Belgian artist Guillaume Gieves in 1848. Trevi has sculpted Luciferian marble sculptures for many clients, especially our artists are very good at sculptures of angel figures.

This famous Lucifer statue is a religious sculpture made in white marble by Belgian artist Guillaume Gieves in 1848. Trevi has sculpted Luciferian famous marble sculptures for many clients, especially our artists are very good at sculptures of angel figures. And, when engraving a famous work of art, our artists would consult a lot of information. So Trevi’s artists are able to sculpt a realistic Lucifer large Angel sculpture for you. If you want to know more carving details, please contact us immediately. 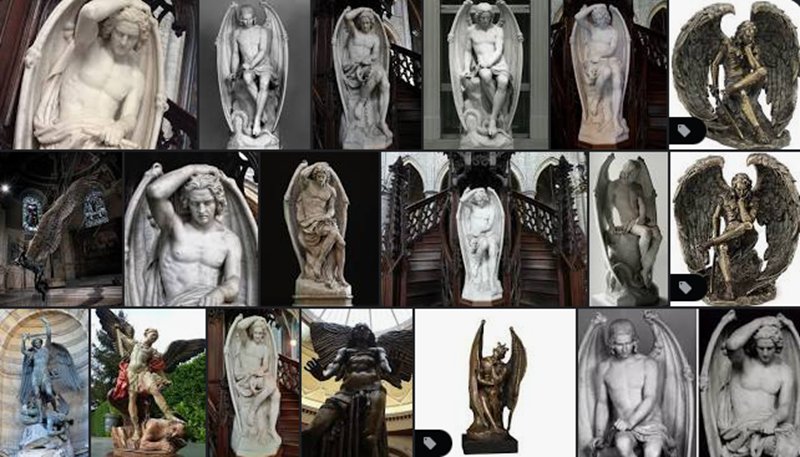 We could clearly see that this Lucifer statue has a classic and charming appearance. In addition, the ankle of this sculpture is locked by a chain. Lucifer sat on a marble. Also, his body is almost naked. But there was a curtain gathered around Lucifer’s lap. In addition, his entire body is hidden in bat wings. This folded wing protects Lucifer. Also, his upper body, arms, and legs are bare. Lucifer’s mid-parted hair is so flowing that it accentuates his handsome face. And, behind him, the bat wings have veins and protruding thumb claws. These knobby wings and strong eagle beaks reveal Lucifer’s demonic nature. Of course, this combo is a perfect combination of bat and human anatomy. The sculpture thus creates an illusion of realism. Most notably, his right-hand holds a broken scepter and peeled crown. It was very touching that a tear fell from the angel’s left eye. The most genius detail is that there is a tasted apple at Lucifer’s feet. Well, surely we all think of the apples in the Garden of Eden. Of course, Trevi’s artists were able to sculpt all these details. There is no doubt that choosing us is your wisest decision. 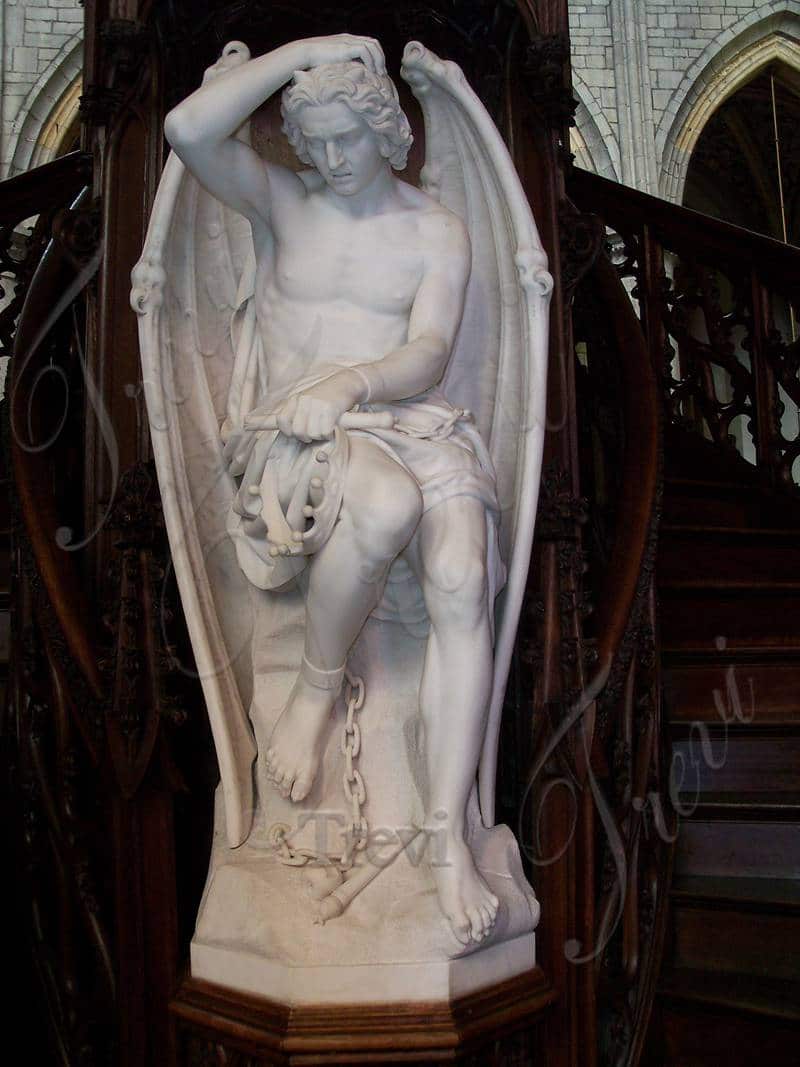 At first glance, Guillaume and Joseph’s versions are strikingly similar and appear to be inspired by the same mannequin. Guillaume changed the direction of the fallen angel’s gaze away from his body. His Lucifer’s knees came together protectively. And, the drapery of the sculpture hangs down from behind the right shoulder. And the drapery undulates thickly on the right side of the body and on the thigh. So, the drapery covers the hips perfectly but doesn’t completely cover the navel. At the same time, the exposed muscles are very realistic. Especially the muscles of the upper arms, pectorals, and calves show clearer masculinity. Lucifer’s raised right arm allows the artist to explore muscle tension. The posture and angle of his head suggest that he is defending against “divine punishment”. 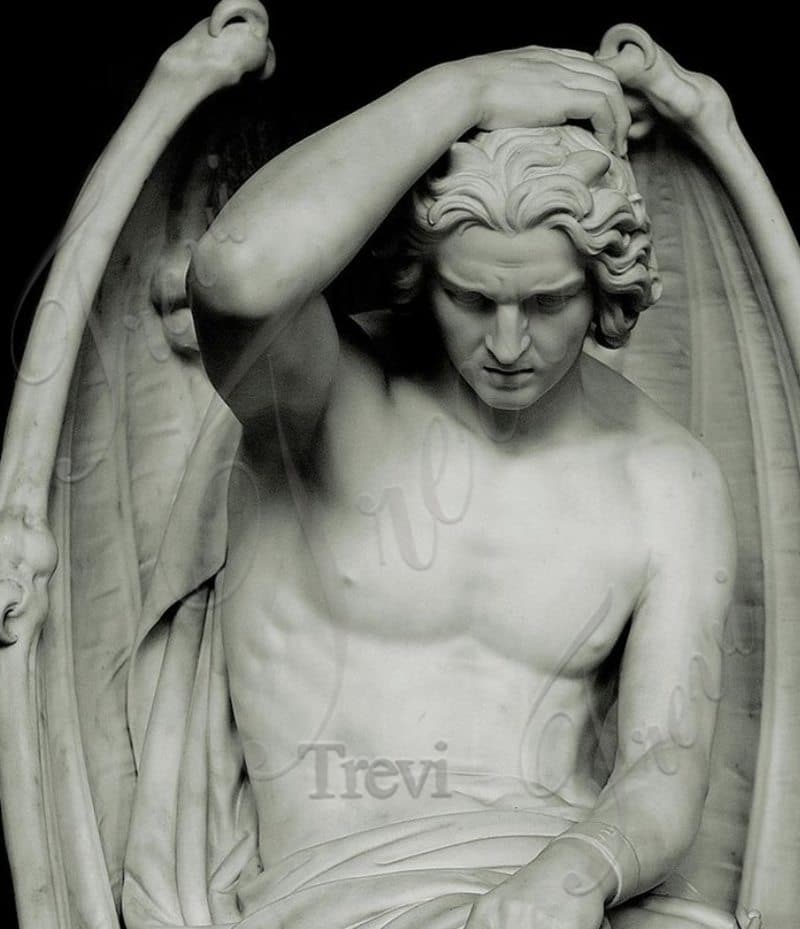 Apparently, this fallen angel took a fully human form. And, the serpentine curves of the angel’s waist and hips perfectly fit the curvature of the wings. Lucifer’s torso is strong and very young. In addition, the expression of the angel is serious, even fierce. His eyes stared down, revealing a melancholy expression. Obviously, the structure of this Lucifer statue naturally shifts the viewer’s attention to the lower part of the body. Besides the wings, the most obvious satanic element is the serpent on the soles of the feet. 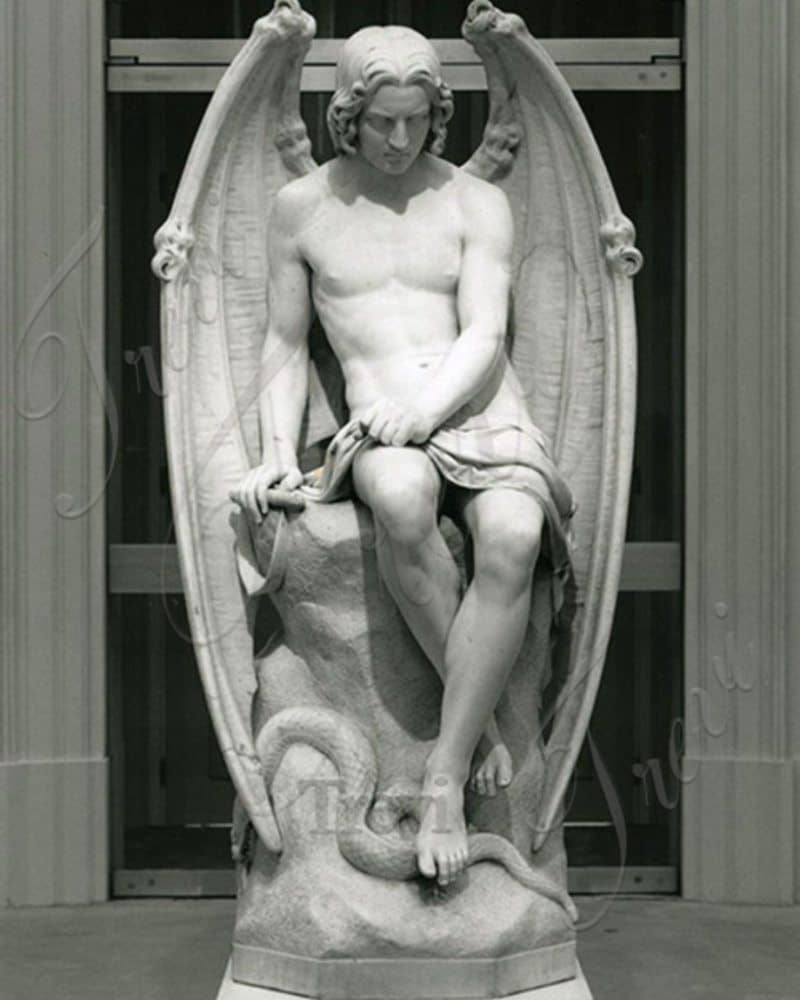 Guillaume added details to enhance Lucifer’s punished theme. First, the “forbidden fruit” fell under the angel’s feet. Also, the star shape at the tip of the broken scepter in his hand is a morning star in the classical tradition. Also, his toenails are narrow and long, very much like demon claws. Also, the pointed horns on his wings are the animal marks of Satan or demons. The shackles of the Lucifer statue replace the snake in Joseph’s version. In addition, the angel’s painful face shows his angry and arrogant gesture. Of course, a tear fell from Lucifer’s left eye to express regret and despair. 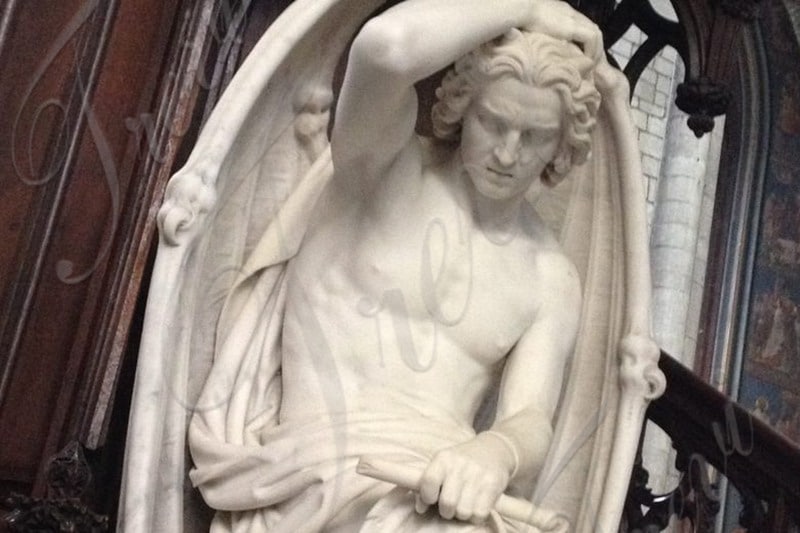 Where Could Sculptures be Placed?

First, this marble Lucifer statue is located on the delicate pulpit of St Paul’s Cathedral in Liege. And he is located in an open alcove at the base of an ornate staircase carved with Gothic floral motifs. Then there is no doubt that this exquisite angel sculpture could be placed in many public places. The first and most preferred place is the church. Of course, it could also be placed in parks, museums, and other office spaces. Classic works of art are always worth thinking about and people could get more life inspiration from them. Choosing this Lucifer sculpture allows us to explore the true meaning of life. 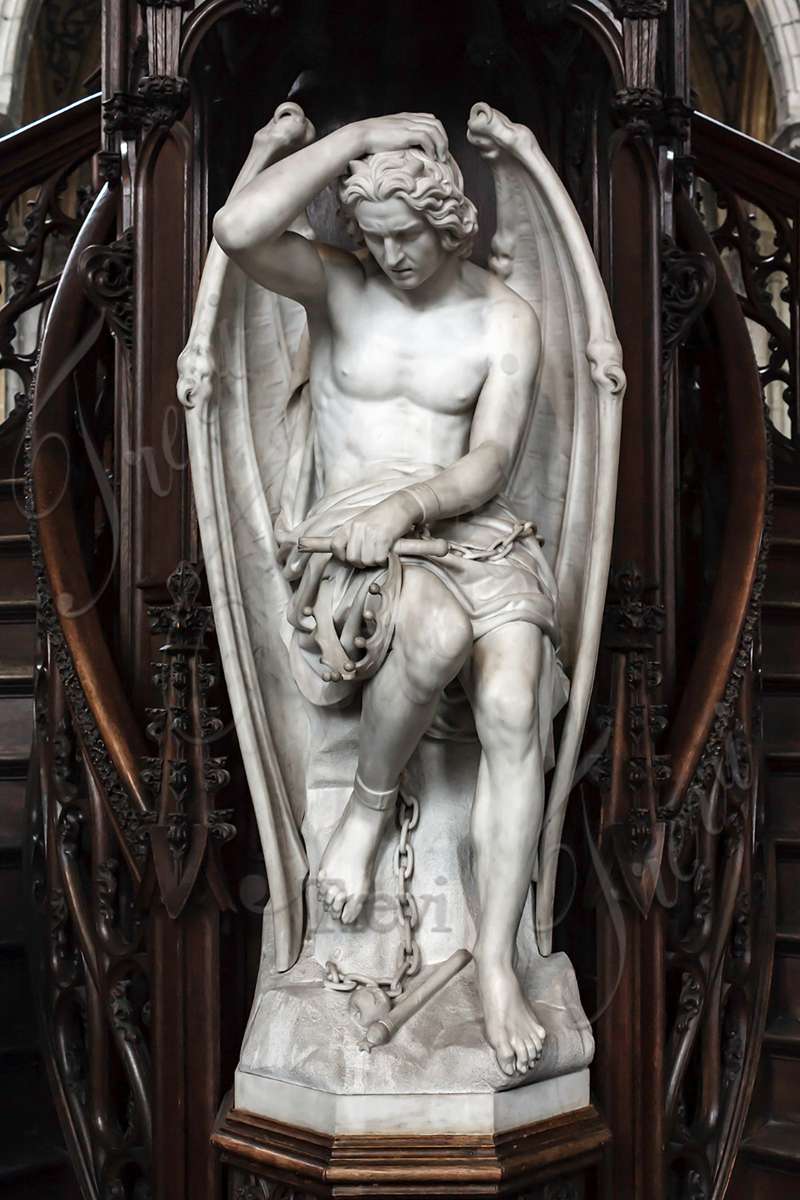 The technique of realism coupled with the restraint and restraint of neoclassical allowed the development of romanticism and heroism. However, Romanticism is more strongly expressed in Lucifer’s sculpture. Joseph’s sculptures have perfect lines of poetry and grace. And Joseph’s sculptures are full of displays. Guillaume’s angels show less flesh, and more strongly show that Sa is not human. This marble angel sculpture illustrates the romantic nature of the sculpture, and the fallen angel’s wings are not objectionable. Instead, his wings form a frame that enhances the beauty of Lucifer’s youthful body. 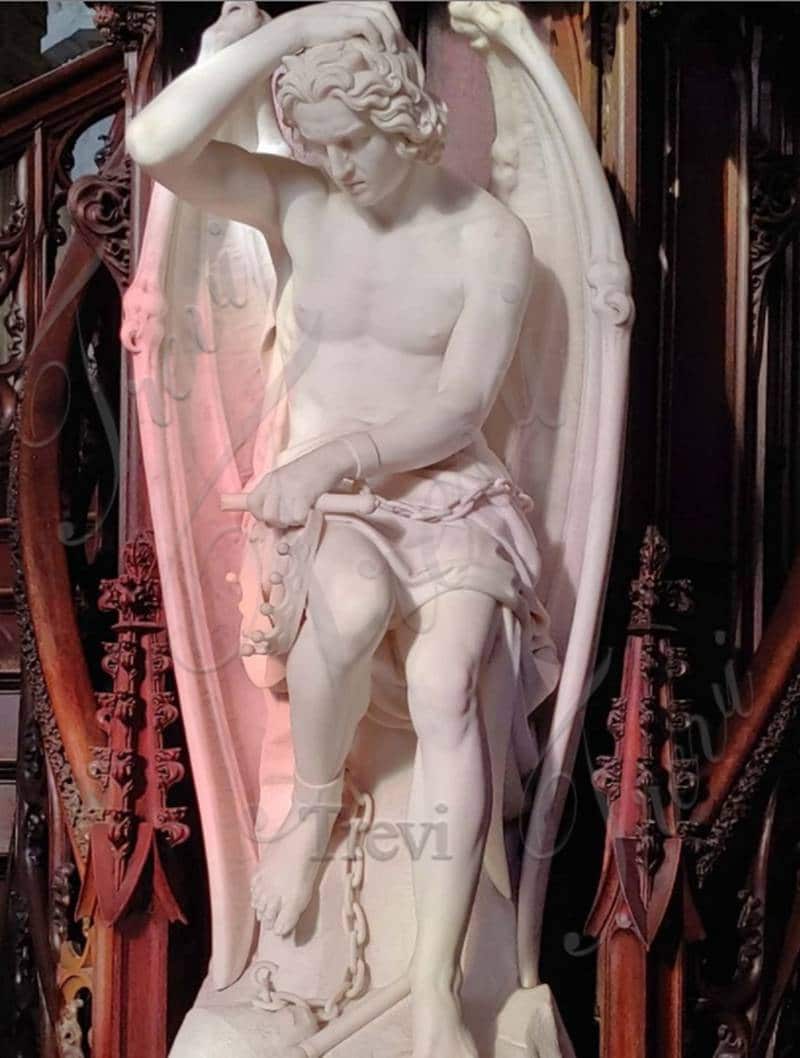 Lucifer is described in Dante’s Divine Comedy and John Milton’s Paradise Lost. First of all, they are saying that Lucifer refused to submit to the Son of Christ. and. He led a third of the angels in rebellion in the north of the heavens. After three days of a great battle, Lucifer’s rebels were routed by Christ. In the end, Lucifer fell into the chaos for nine mornings and evenings before falling to hell. After that, God created new heaven and earth and human beings. However, in order to take revenge and seize the new world, Lucifer turned into a snake and infiltrated the Garden of Eden. Also, Lucifer lured Eve into eating the forbidden fruit. Again, Eve also seduced Adam to commit this sin against God. So Lucifer caused mankind to fall with him. And opened the door to this new world for the demon gods. Since then, sin, sickness, old age, and death have finally spread all over the earth mankind. In addition, Lucifer is also the sin of the arrogance of the Seven Deadly Sins. 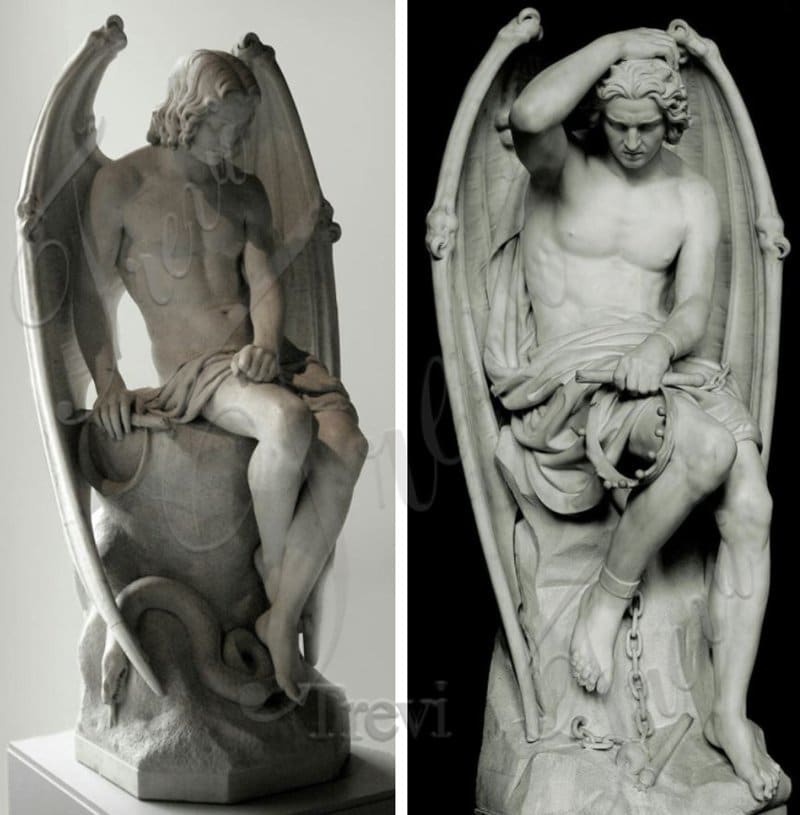 The relationship between Lucifer and the Fallen Angels:

In the Abrahamic religions, fallen angels are the general term for angels who were punished and banished from heaven. Especially for Lucifer, the legendary fallen angel. In Christian teaching, a fallen angel is an angel who has been expelled from heaven. The usual reason for their expulsion is due to rebellion against God. Also, the most famous fallen angel is named Lucifer, who led the angel in rebellion and challenged the authority of God. So he was cast out of the kingdom of heaven and driven to earth. According to some traditions, fallen angels have been roaming the earth. Then, until Judgment Day comes, the fallen angels would be thrown into the lake of fire and then go to hell. 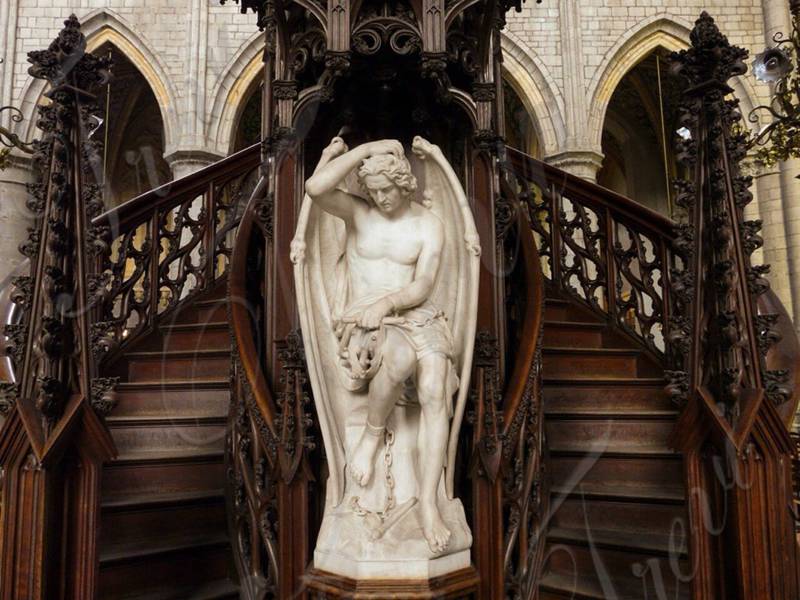 According to some Christian churches, Lucifer was an angel before the fall. He lost the glory he had in the past by being exiled. As a result, Lucifer was cast out of heaven and degenerated into the devil (Satan). Lucifer rebuilt a new heaven-like world in hell. There he became the devil, Satan, and the fallen angels who followed him became demons. 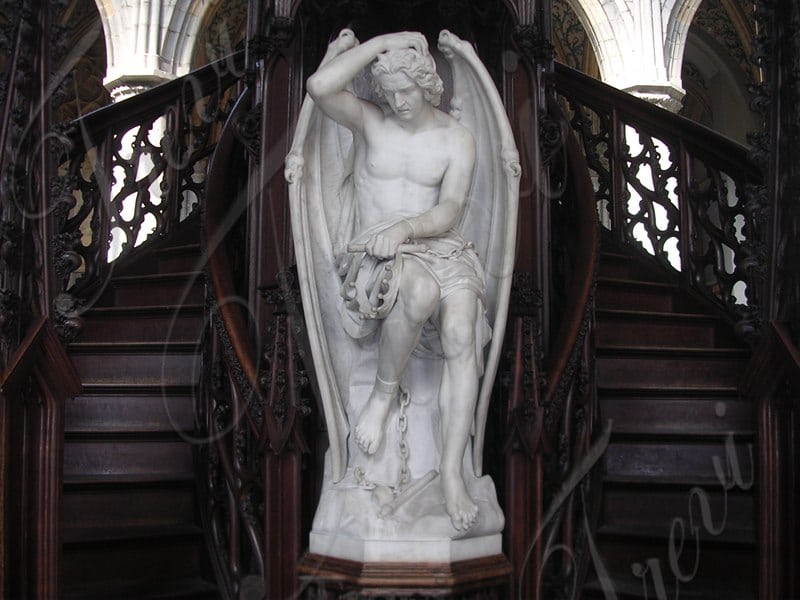 Luciferianism is a belief system that honors Luciferian qualities and characteristics. Traditionally, they usually do not see Lucifer as a symbol of the devil. Yet they saw Lucifer as liberator and protector. These people who believe in Luciferism often refer to themselves as “Luciferians”. Also, Lucifers generally support the protection of nature or the earth. They also support artistic innovation and scientific advancement. Of course, these are all crucial to human development. Furthermore, the Lucifers did not believe in an afterlife, so they believed that humans should focus on their own life. We should make the most of every day and not waste any time. 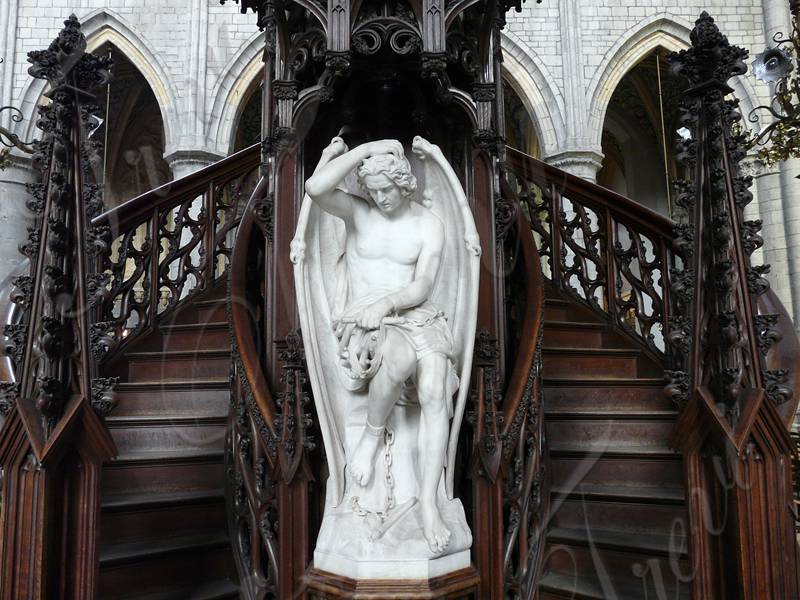 So, through this article, did you know more about Lucifer. Moreover, the charm of the Lucifer sculpture itself deeply moved you. If you would like to engrave a realistic religious sculpture, please contact us today. Trevi would carve you a 100% similar Lucifer sculpture.